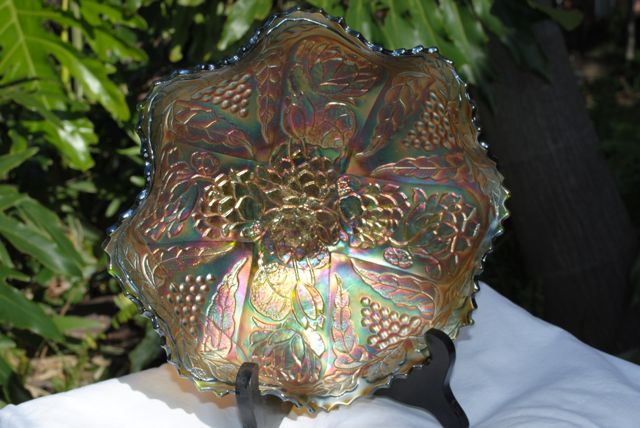 Carnival glass is moulded or pressed glass, always with a pattern and always with a shiny, metallic, "iridescent" surface shimmer.

Carnival glass gets its iridescent sheen from the application of metallic salts while the glass is still hot from the pressing. A final firing of the glass brings out the iridescent properties of the salts, giving carnival glass the distinct shine it is known for.

Carnival glass originated as a glass called 'Iridill', which began to be produced in 1908 by Fenton (founded in 1905). Iridill was a cheap imitation of the iridized fine blown art glass produced by Tiffany, and was an instant success.  Other companies such as Northwood, Dugan, Imperial and Millersburg soon followed Fenton's lead, and carnival glass was in its heyday from about 1908 to 1920. Tiffany was not too happy about it. One well to do lady said it best, "When the maid can afford similar glass, I don't want it."

However, when the industrial revolution hit the glass industry in the early 1920s, many of the hand making glass companies went under, as machinery could produce nearly 50 ton of glass daily even back then.  The first depression glass patterns came out in the mid 1920s and kind of took over. They were cheap and colourful machine made glass.

People stopped buying "Iridill", and most of it was sold to the traveling carnivals to be used as game prizes, thus the name Carnival Glass.

Most U.S. carnival glass was made before 1925, with production in clear decline after 1931. Some significant production continued outside the US through the depression years of the early 1930s, tapering off to very little by the 1940s.

In Australia the Crystal Glass Company produced most of its carnival glass in the mid to late 1920s.

Carnival glass is highly collectable. Prices vary widely, with some pieces worth very little, while other, rare items command thousands of dollars. Examples of carnival glass can be easily found in antique stores, and there is a very active market for it on-line and through organised clubs.